FC Nordsjaelland decided to renew the playing surface of the Farum Park, home stadium of the club since its creation in 1991, installing a third generation artificial turf with 100% natural infill and a brand new heating system to allow perfect playability during the cold winter months.

In recent years the team has been recognized for its offensive style, attitude that broght the team to the top of the Danish football. In May 2012, FC Nordsjaelland won the first Danish Superligue title of its young history, earning the right to participate to the 2012-2013 edition of the UEFA Champions League.

The subbase construction started immediately after the completion of the 2011-2012 football season, with the staff present on-site day and night in order to speed up the operations.
The team planned to inaugurate the new stadium at the end of July 2012, in time for the third official match of the season, giving the team plenty of time to get used to the new football turf and to be ready for the first official Champions League match scheduled at the end of September.

The system installed at the Farum Park includes the usage of 10 mm drainage-mat for horizontal drainage and a pre-fabricated shockpad that provides the right level of shock absorption needed for a professional football pitch, guaranteeing constant top level performance.
An innovative electric heating system was put between the shockpad and the turf, to allow the team to play on a perfect surface also during the rigid Danish winter months.

The installation of the turf was directed by Limonta Sport and completed before the deadline, to allow the First Team and the youngsters to get used to the new playing surface before the beginning of the season.

Infill Geo Plus, the patented 100% organic and natural infill used for this important project is without any doubt what attracted the attention of players, coaches and football industry in general. Already well known at professional level training facilities, this revolutionary infill is now point of reference for the world of artificial turf installations in Stadium and Arenas.

Completely natural, Infill Geo Plus is odorless, has great drainage capability and maintains the top level of performance required by FIFA for professional football, adding a foot stability and energy restitution level unknown before in football turf systems.
All these characteristics are greatly appreciated by the players, the real factors that professional companies as Limonta Sport have to focus in the development of football system.

The 10,000 seats were renewed for the comfort of the fans, and the football pitch designed to allow the highest playability also in extreme weather conditions.
The club opted for the top professional system available, a high quality surface that will make the Farum Park one of most attractive football pitches in Europe.
The FIFA 2 Star Certification (the current FIFA Quality Pro one) was obtained on July 25th, giving the club the possibility to play International Matches on the football turf and to position the Farum Park within the top football arenas in Europe.

FC Nordsjaelland proudly embraced the vision of its own management: to bring a medium size club and its local community to the top of national football and to earn its own space within the European football elite.
The football turf allowed the club to extend to the Academy teams to play important matches inside the Farum Park, giving the players possibility to taste the atmosphere of professional football. 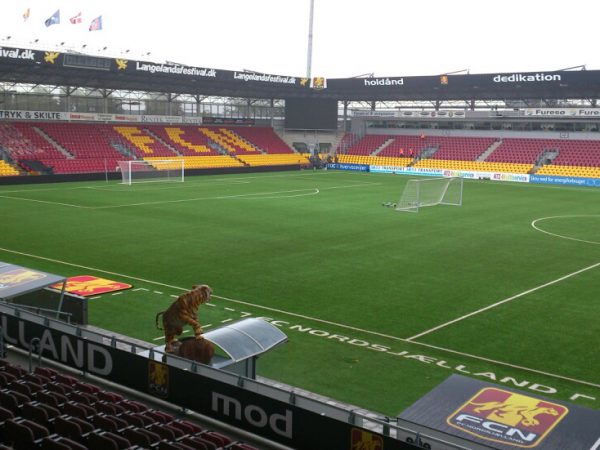 and innovative infills and product range